UFC heavyweight Jon Jones has found himself in hot water and perhaps faces the biggest setback of his life and career. Chiefly, this is an understatement when looking at the slew of charges he is facing following a series of incidents in Las Vegas. Following his Hall of Fame induction of his bout against Alexander Gustafsson, news broke that Jones was arrested.

The charges against Jones included misdemeanor domestic battery and felony tampering with a vehicle. The details that emerged about the case have been harrowing, to say the least, and there’s a lot yet to be uncovered. For once, the MMA community isn’t sure if ‘Bones’ Jones will be able to recover from his recent predicament and pick up where he left off.

The consensus GOAT took to Instagram and posted a story alluding to the incident through a workout video on his story. Jones can be seen on the bench press with several small statements around addressing his predicament. One of the biggest takeaways was the statement that Jones has decided to quit the consumption of alcohol going forward. 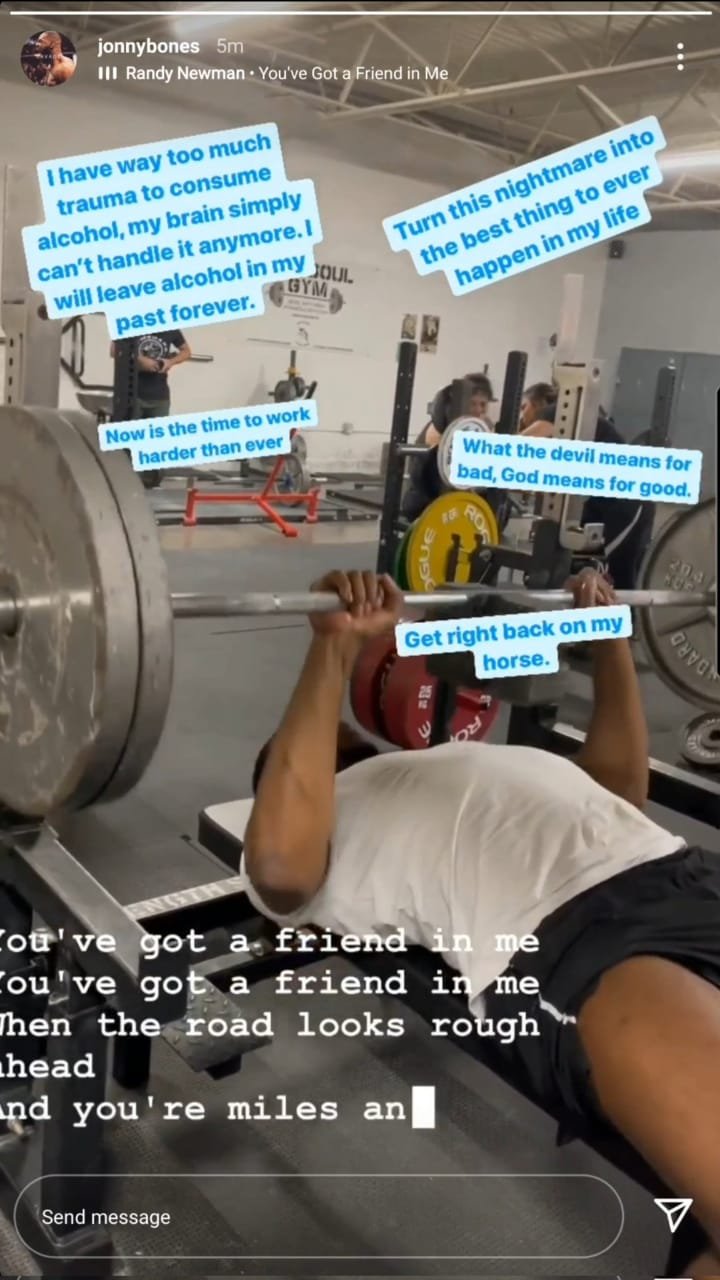 UFC President Dana White aptly outlined the fact that Jon Jones can’t help but get into trouble upon landing in Vegas. Merely a few hours after his induction into the UFC HoF, he found himself in custody for a slew of scathing charges. As it stands, his return to active competition seems to be the furthest thing from everyone’s mind.

For a significant period of time, it seemed as though Jon Jones had managed to get his life in order following early incidents. From being involved in a hit and run and several other DUI charges, Jones appeared to be on the straight and narrow. Furthermore, he seemed solely focused on making his heavyweight debut in the first quarter of 2022.

However, the aforementioned charges promise to derail his plans and it remains to be seen how things shape up from here. Fans will be keen to see if Jones can follow through on his promise of staying away from alcohol as he aims to pick up the pieces.

Read this story: Top 5 Biggest Rivalries in the History of the UFC

The post ‘I Will Leave Alcohol in My Past Forever’- Jon Jones Breaks Silence After His Recent Arrest appeared first on EssentiallySports.