Two-time WWE Hall of Famer, Hulk Hogan is regarded as one of the greatest performers to step inside the squared circle. Here’s a look at the immense legacy The Hulkster has left on the Survivor Series PPV for WWE.

Hogan currently has a healthy 4-2 record at Survivor Series PPV which has a mixture of over-the-top matches and some underwhelming matches.

Watch This Story: The Rock to John Cena: WWE Superstars Who Created Iconic Moments at Survivor Series Over The Years

However, if Shawn Michaels is called Mr. WrestleMania for his performance on that PPV, then Hogan can easily be regarded as synonymous with the Survivor Series PPV.

The team of Hulk Hogan vs the team of André the Giant, 1987

After the stellar performance from Hulk Hogan and André the Giant at WrestleMania III, their rivalry continued as the very first Survivor Series PPV came right on the corner.

Hogan was still the babyface of the company and Andre was enjoying his first-ever run as the heel. The two individuals made their respective teams with WWE Champion Hulk Hogan captaining his side, which featured Bam Bam Bigelow, “The Rock” Don Muraco, Ken Patera, and “Mr. Wonderful” Paul Orndorff. 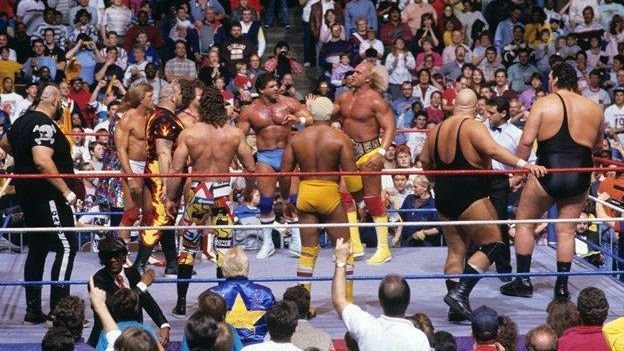 On the other side of the ring was Andre the Giant’s team, comprising Andre, Butch Reed, King Kong Bundy, One-Man Gang, and Rick Rude.

However, the ending of the match was not something which The Hulk had wanted as Bundy pulled Hogan out of the ring and he got counted out. Eventually, team Andre won the match when the Giant pinned Bigelow.

The golden pair of Hulk Hogan and Randy ‘Macho Man’ Savage was the buzz of the year 1988 and gave WWE Universe one of the best tag team matches in history.

Eventually, Hogan and Savage formed their team for the survivor Series PPV called – The Mega Powers with Hercules, Hillbilly Jim, and Koko B. Ware on their side. 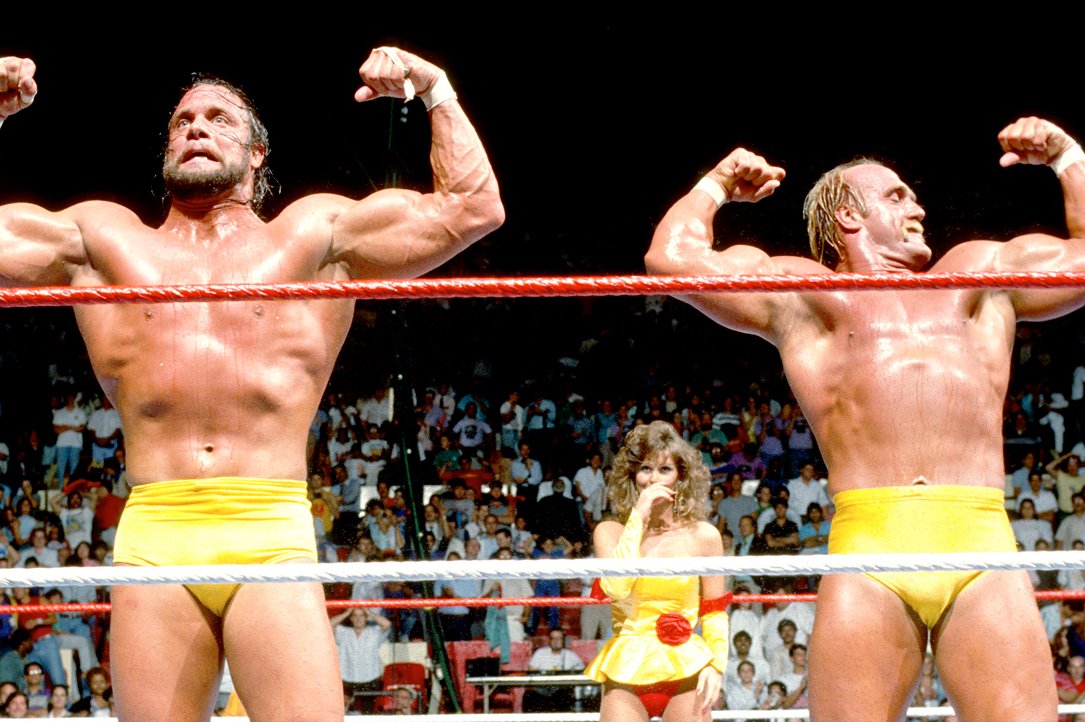 However, they faced the fierce team of Akeem and Big Boss Man with Ted DiBiase, Haku, and The Red Rooster, competing in the 5 on 5 traditional tag team elimination match at the PPV.

The Mega Powers got the upper hand earlier in the match and Savage hit the Red Rooster with his signature high flying elbow drop from the top rope.

Towards the ending of the match, Hogan and Haku were the ones who battled their hearts out in the middle of the ring. However, Hogan got the victory after he successfully delivered his leg drop for the three count.

The Hulkamaniacs vs The Million Dollar Team, 1989

With his grand performances in 1987-88, the WWE Universe accepted The Hulkster as the guy who defined the PPV. So it was natural for the crowd to see Hogan in 1989’s main event of Survivor Series.

Hogan’s team was dubbed as ‘The Hulkamaniacs’ which had WWF Champion Hulk Hogan, Demolition’s WWE Tag Team Champions Ax, and Smash, and Jake “The Snake” Roberts. 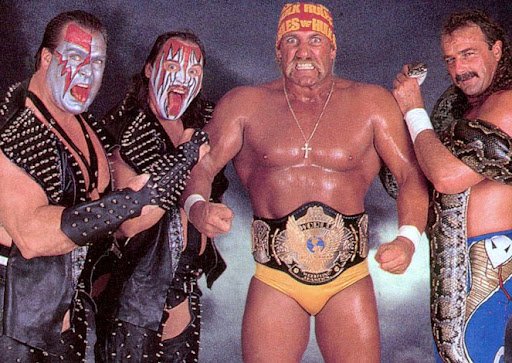 Hogan’s team faced ‘The Million Dollar Team’ which was led by Ted DiBiase with The Warlord, The Barbarian, and Zeus. This match was arguably one of the best traditional tag team matches at the PPV. 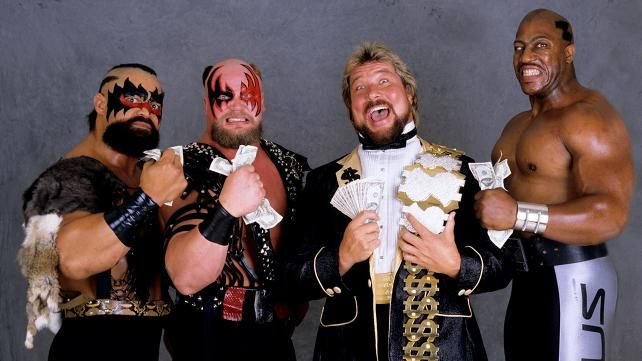 Zeus got himself intentionally disqualified early in the match, as he refused to release the chokehold on Hogan. However, the ream of Ted DiBiase bounced back with their heel tactics.

Soon, Powers of Pain got disqualified for illegally fighting Hogan, which left the ring with Hogan and DiBiase. Eventually, Hogan won the match when he delivered the leg drop on DiBiase.

The Hulkamaniacs vs The Natural Disasters, 1990

Hogan found himself again in a tag match at the Survivor Series, this time feuding with The Earthquake with two of the captains of their side.

The Hulkamaniacs comprised Hogan, Big Boss Man, Jim Duggan, and Tugboat and they went head to head with Earthquake, The Barbarian, Dino Bravo, and Haku. 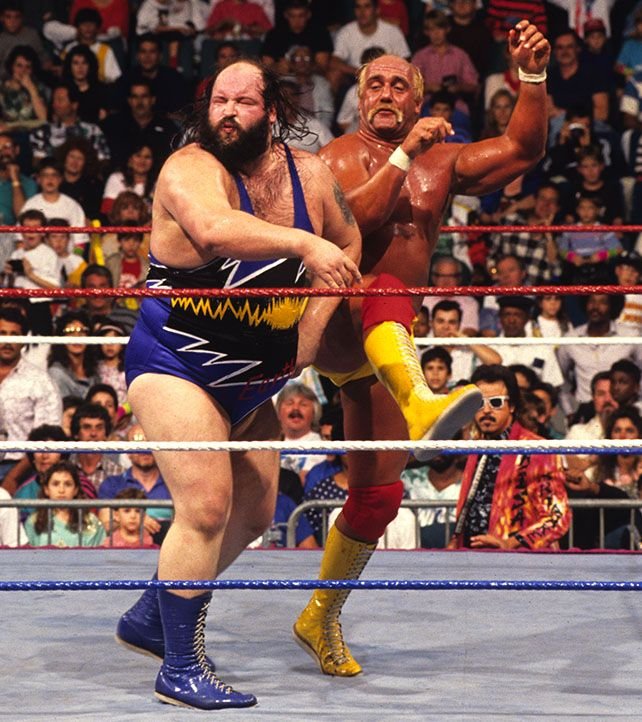 Hogan and Big Boss Man helped their team to get off with an interesting start when Hogan and Boss Man eliminated Bravo and Haku, respectively.

However, the heel team of Earthquake bounced back, and eventually, Hogan and Barbarian were the only ones who remained in the ring to settle the scores. Soon, The Hulkster got the better of Barbarian and pinned him after his signature Leg Drop.

Hulk Hogan vs The Undertaker, 1991

In 1987, Hogan created history when he main-evented the PPV with fellow superstar. At Survivor Series ’90, Hogan again reached a landmark when he became the first man to defend the WWF Championship in a singles match at Survivor Series. 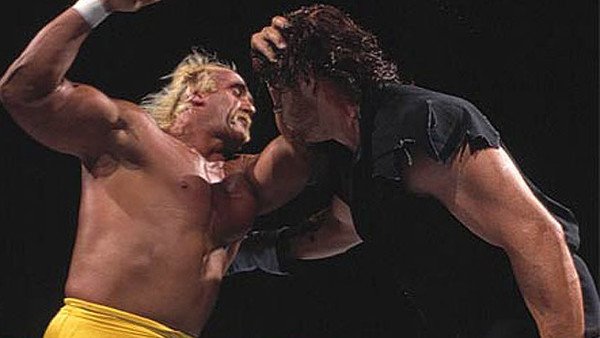 However, this time around, things didn’t work well for the reigning WWF champion. The two legends had an underwhelming match, but it was special for the WWE Universe.

After two tombstones, The Deadman eventually snatched the WWF Championship from the Hulkster, making his last appearance for the PPV.

The NWO member still holds the record of most wins at the Survivor Series PPV, with a total of six appearances and four wins with two losses.